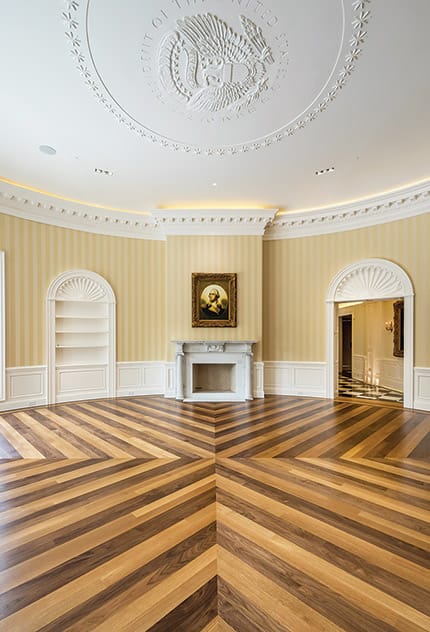 History may repeat itself, but when it does, it’s rarely as precise as Houston-based Schenck and Company’s reproduction of the Oval Office’s wood flooring. The client, a veteran fighter pilot who now works with the federal government, wanted to build an exact replica of the West Wing of the White House in his Houston home, right down to the rugs, paintings, and the walnut and white oak floor in the Oval Office.

“He researched every detail of this whole building,” says Greg Schenck, owner of Schenck and Company.

The wood flooring design in the Oval Office was chosen by Nancy Reagan to replace the linoleum from the Lyndon Johnson administration. The floors were replaced in 2005 but maintained Reagan’s design.

Schenck and his crew began by bending the borders that would encompass the famously oval room, making the templates from its curves on site and bending the boards in their shop. When it came time to install, they started in the center, right under the plaster presidential medallion on the ceiling, and glued and nailed the engineered planks over plywood.

“There’s a lot of geometry involved, and the layout was the big challenge,” Schenck says of the 836-square-foot room. After the floor was laid, it was buffed and burnished with six coats of DuraSeal Neutral stain and sealer. The completed “West Wing” now serves as an office and event space.

“It’s probably one of the highlights of my career,” Schenck says of the once-in-a-lifetime project. “It’s a replica, so it’s not, you know, creating history. But it’s recreating history. And that’s important to me.”