We tramp on them with mud-caked boots. Pets scratch them up with paws and grit. Guests add wear to everyday activity. Wood floors take a lot of abuse. Which is one reason they should take priority in a new home plan. With unlimited options – from traditional oak to exotics, from simple planks to intricate inlays – a skilled artisan can create just about anything the creative mind can conceive. Greg Schenck, owner of award-winning Schenck & Company, came up with an unusual material for one family’s floor: weathered wooden shipping pallets.

According to Schenck, a couple building a home in Tanglewood came into his showroom years ago saying they were interested in installing a reclaimed floor. “I had a sample I had made from wood pallets,” Schenck recalled. “It was unique, and they loved it.”

Schenck & Company is one of Houston’s premiere wood flooring contractors. Their Heights showroom is a gallery of custom designs ranging from durable rustic planks to intricate inlays to elegant mixed-wood woven patterns, using antique, reclaimed and distressed wood along with traditional and unusual materials.

Not only must each job meet aesthetic and physical requirements, it must meet client expectations. “I don’t know if people think of flooring as a creative process, but it clearly is. And obviously there are many challenges along the way,” Schenck said.

In this case, Schenck met the couple’s expectations exceptionally well. When they decided to build a ranch home near Brenham, they asked Schenck to reproduce the floor he had created in their Houston home.

“After more than ten years, they were pleased with the way the floor functioned in their home,” Schenck said. “They liked the way it wears and works for their family. They entertain a lot, they have dogs, and they wanted a floor that could stand up to being really lived in. We had finished the wood so there are no sharp corners, splinters or uneven boards for people to trip on. Walking barefoot on it does not feel like walking on pallets.”

To get the visual balance that’s important to a floor design – especially to a perfectionist like Schenck – is a process that requires a lot of up-front work. Concept, sketches and layouts come first; once the client approves the design, Schenck’s son Christopher, who works with his father, uses CAD software – a computer-aided drafting program – to refine the design based on exacting measurements and to anticipate any potential issues in the actual construction.

The program was useful here because pallet wood comes in non-standard sizes. Uneven, side-by-side planking would have lacked grace and refinement and some planks had to be cut to remove unusable sections. The solution was to look at the area as a series of spaces, and create borders and centering based on those spaces while uniting the whole.

In the photo above, a centerline gracefully divides the horizontal planks giving the hallway balance and interest down its entire length. In the view to the left, the same treatment borders the sitting area, while creating a separate visual space alongside the stone fireplace, then carrying into the dining room to become an element in that room’s comfortable and integrated feel. (See top photo, page 5.)

The Schencks contacted multiple suppliers, more accustomed to buyers in the market for new pallets rather than the aging ones piling up in their storage yards. To create the precise degree of uniformity and contrast they envisioned, they had to do some personal shopping. The younger Schenck ultimately found a small Houston supplier who agreed to open up his yard so Chris could personally select the pallets to be used.

“There are multiple grades of pallet wood, and suppliers tend to mix them all together,” Chris said. “We took the worn and weathered ones off their hands, the ones they were ready to toss out. We tried to get as much hardwood as possible, because pine and other softwoods have different grains and they wear and stain differently.”

Greg Schenck added, “That’s one thing we didn’t realize at first. There are all sorts and sizes of pallets, with different wood content, and in a lot of cases only partial pieces of a plank are useable. So there are limitations to what kinds of patterns, textures and colors you can create in a wood pallet design.”

The design itself has a history that reveals how the creative mind of an artisan works. For Schenck, the concept began on a trip to The Gage Hotel in Marathon, Texas, a building completed in 1927 that melds Mexican, Spanish, and Native American architectural styles. Schenck was relaxing in the bar when he happened to look up and notice the ceiling treatment called vigas y latillas, which translates roughly to “beams and slats.”

“There were these exposed beams with slats behind them. And I thought, ‘Why couldn’t you do a floor like that?’ I knew it was a cool concept, but without the right wood it wouldn’t make any sense.”

It took a while for Schenck’s inspiration to take shape. “Then, at some point I was driving past a pallet yard and I noticed these stacks of pallets that looked like waste. And I thought, ‘Well, why can’t you use that wood?’”

It seemed like a great idea – the material is inexpensive and widely available, and the design would be appealing to homeowners looking for something unique. But the concept came with its own issues.

First, the pallets had to be dismantled, and the good wood separated from the unusable. Nails had to be removed by hand, and there was little conformity in the width and depth of the boards.

“What we found out is that using wood pallets is a very labor-intensive process. Even if you buy pallets broken apart, the nails are still in the boards and they have to be pulled,” Schenck explained. “Once you get them disassembled and de-nailed, you have to strait-line rip them, to get the edges somewhat parallel.” But a smooth, fresh cut is not what the design calls for. “Suddenly you’ve got a clean, crisp edge, which is inconsistent with the look. So now you have to distress the edge,” Schrenck said.

Here, the craftsman’s approach overcame the problems. “Some planks are higher than others because no aged wood floor stays perfectly flat,” Schrenck said, “and that all adds to the authenticity of an old floor. And our goal was to have something that looked like it had been there forever.”

As for the nails and nail holes, “We intentionally left the ones we could. “You celebrate them, it’s part of the charm, part of the natural beauty of using repurposed wood.” That charm and beauty is evident in all the rooms shown here.

Color was another factor, and that is a matter primarily of two things: the varying ages of the pallets and the unique combinations of wood in the planks. “Aged wood grays as it weathers,” Schenck explained. “So we abraded those planks to let more of the natural color of the wood come through as well as to make them more even in height with the less-aged pieces.”

As for wood types, “We looked for planks with as much hardwood as possible because pine is going to wear differently than oak, it will stain differently, and it’s going to have different grain patterns,” Schenck said.

“We ended up having to tighten the color range to make it more uniform. In a floor like this, where you’ve got a lot of pattern, you want minimal grain and color activity to avoid distraction.

“The layout was incredibly challenging – we had to get planks to appear like they’re full-length panels,” Schenck said. “It’s like playing with blocks. You pop lines and lay it out loose until it works.”

The stairs (left) posed the most demanding part of the puzzle. “Normally we get treads to match the floor, and I didn’t know how we were going to do that,” Schenck said. “But like most of our projects, it unfolds as the process evolves, and sometimes the answer is just obvious.”

The result was a centerline that climbs up the middle of the stairs, which lead up to the second floor office landing. The centerline is a continuation of a panel in the room below for an effect of movement and continuity with a unique personality – waste translated into elegance.

“Maybe we over analyze things but we bring the same attention to the detail of a straight plank floor as we do to complex basket weaves and inlaid designs,” Schenck said. “How do you install a curve in a rounded section of a room without a seam? How do you lay out a complicated design so that it’s symmetrical? These are the kinds of things that keep you up at night. But this is what we do, and it’s wonderful.” We couldn’t agree more. 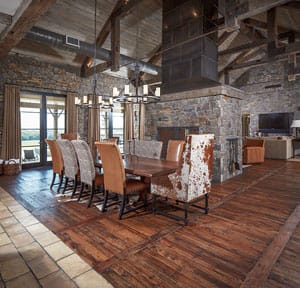 “They liked the way it wears and works for their family. They entertain a lot, they have dogs, and they wanted a floor that could stand up to being really lived in.”
— Greg Schenck

“I don’t know if people think of flooring as a creative process, but it clearly is. And obviously, there are many challenges along the way.”
— Greg Schenck 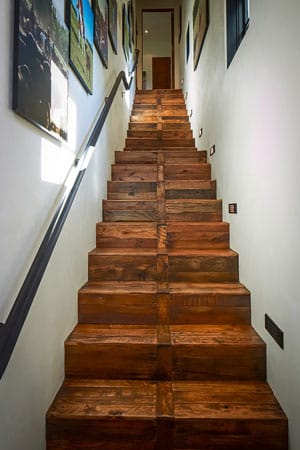 “We looked for planks with as much hardwood as possible because pine is going to wear differently than oak, it will stain differently, and it’s going to have different grain patterns.”
— Greg Schenck